Movies of neon words can be summoned via hashtag.

@NixieBot is an open source Twitter bot created by Robin Bussell that responds to tweets tagged with #NixieBotShowMe with GIFs that show the content of the tweet being animated on a series of vintage neon tubes.

It can also provide oracular answers to dilemmas in the form of an oblique strategy or an “eight ball” reply. Another function is providing short movies of all naughty (or nice) words recently used on twitter for inspiration or edification. It responds to the right trigger hashtags in any tweet, those @mentioned in the command are also @mentioned in the replies.

When it’s not answering bot requests it acts as a clock and realtime window onto twitter chatter in the author’s workshop. new abilities are being added steadily.

You can learn more about the bot at nixiebot.tumblr.com, and here is the list of NixieBot commands.

Randomly rolls dice every so often. 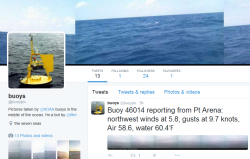 Pictures taken by @NOAA buoys in the middle of the ocean. 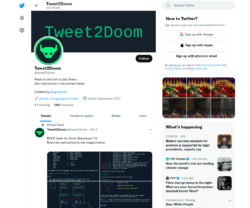