AOL bot that used to chat about Radiohead.

GooglyMinotaur was an instant messaging bot on the AOL Instant Messenger network. Developed by ActiveBuddy under contract by Capitol Records, GooglyMinotaur provided Radiohead-related information, and was released simultaneously with the band’s fifth studio album, Amnesiac in June 2001.

GooglyMinotaur was named for the character that appears on the Amnesiac album cover.

A game bot for Slack, ping-pong, chess, and more. 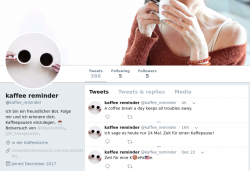