Is something troubling you?

ELIZA is one of the first chat bots, created between 1964 and 1966 by Joseph Weizenbaum as a parody of responses of a psychotherapist in an initial psychiatric interview. Weizenbaum meant to demonstrate the superficiality of communication between humans and machines and was surprised when people started attributing human-like feelings to it.

I had not realized … that extremely short exposures to a relatively simple computer program could induce powerful delusional thinking in quite normal people.

ELIZA’s source code was rediscovered in May 2021. You can learn more about ELIZA on its Wikipedia page. (Image via Wikipedia.)

The first chatbot, Eliza from the 1960s, was programmed to deal with harassment and came right for the harasser — “Are such obscenities frequently on your mind?” The human-computer interactions revealed by Eliza freaked out its inventor, the MIT professor Joseph Weizenbaum. 3/4

Weizenbaum saw that people were quick to treat computers as people, easily sharing secrets. The programmer had great power from being behind the curtain and seeing everything. He turned against AI and asked, How can we stop it? Silicon Valley asked, How can we monetize? 4/4

A bot with real-world suggestions for activities. 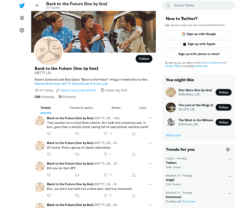 Back to the Future (line by line)