Tweeting the census one real american at a time.

[…] Twitter bot that mines for details in the [Census] data. […] it tweets short biographies of Americans based on data they provided to the U.S. Census Bureau between 2009 and 2013. Using a small Python program, the bot reconstitutes numbers and codes from the data into mini-narratives. Once an hour, it turns a row of data into a real person.

I was laid off from work. I worked less than half of last year. I am looking for work. I work in iron and steel mills and steel products.

I have been taking care of my grandkids for about 3-4 years. I live with my grandkids. I don't have health insurance. I am self-employed.

With the yearly average wage in the US, you could buy 10,610 big macs.

Correlations between prehistoric animals and deaths in the US. 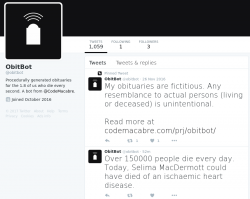 Procedurally generated obituaries for the 1.8 of us who die every second.