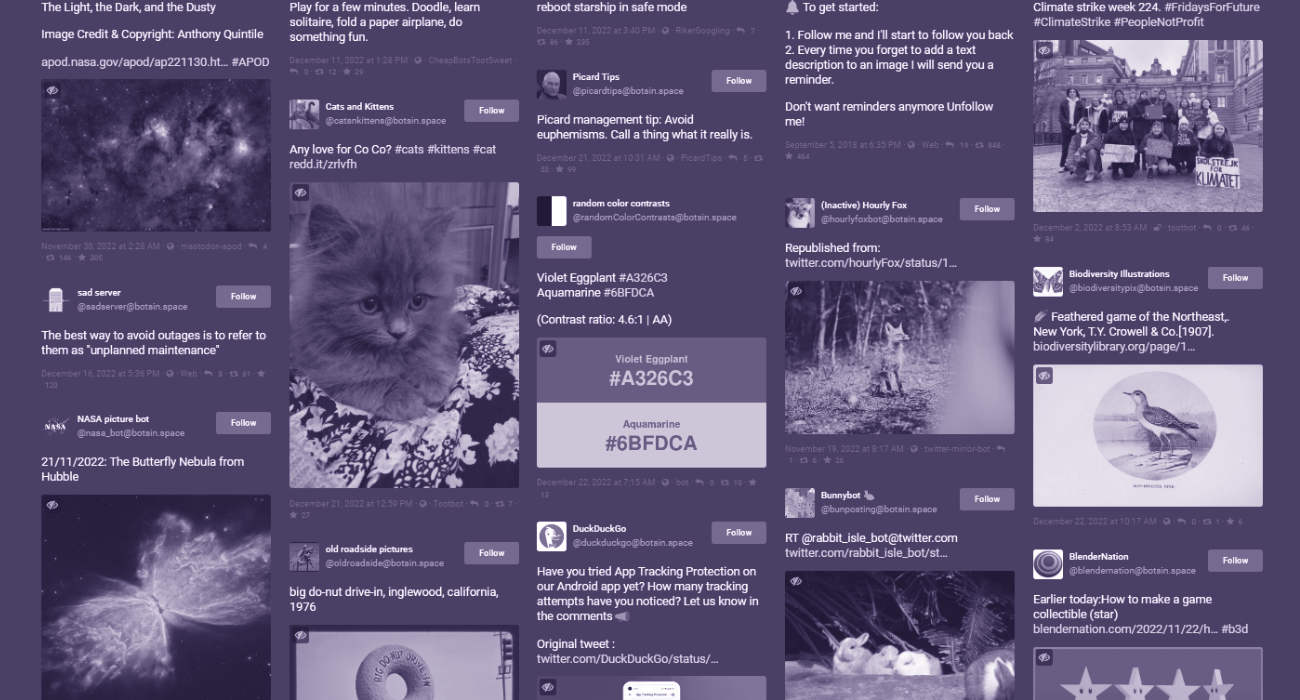 📅 a month ago in Article | Updated 5 days ago

With the gradual decline of Twitter, the focus continues to shift to alternative social media networks. And the one I am most hopeful about is Mastodon, or the fediverse in general. But unlike with Twitter, it’s not as straightforward to compile a list of bots with the most followers across the whole fediverse, so instead let’s just look at botsin.space for now.

botsin.space is a dedicated Mastodon instance for creative botmaking. (I spoke with its creator back in 2018.) The only other fediverse instance I’m aware of, beeping.town, is sadly no longer online.

One of the features of Sidekick is notifying the Botmakers Slack group about new bots created on botsin.space. From these notifications I was able to create a sizable dataset of the bots posting there.

The distribution of the number of followers does bear a striking resemblance to what we see on Twitter, with one account being quite a bit ahead of the rest.

Here’s a breakdown of when the bots in my dataset were created.

Keep in mind that Mastodon was created in March 2016, and the botsin.space instace came online a year later, in April, 2017. But more than the number of followers, It’s more interesting to compare the kind of bots that post there.

I had the opportunity to speak with the creators of the two most followed bots on botsin.space: codl, the maker of the Astronomy Picture of the Day bot, and JP, a software engineer, author, and publisher behind selfcare.tech.

Stefan What is your history with bots? How did you become interested in making them?

codl In the early 2010s I made an IRC bot for a small channel I hung out in, after reading about other bots like #xkcd’s Bucket. The main feature of it was, it would build a Markov chain of everything everyone ever said in the channel, and could be prompted to spit out probabilistic nonsense at the drop of a command. It was a fun conversation starter.

Fast forward a few years, on Twitter, getting a Markov bot of yourself was the current hot thing. Feeling like the scripts everyone was using were confusing and janky, I learned how to use the twitter API and used my existing knowledge of Markov chains to make my own bot. From there, I played around with making some other simple Twitter bots, and somehow became my friend group’s referent botmaker.

JP A few years back I was following a few bots on Twitter and it was fun seeing the creative things people were building with various dynamic generation tools. A friend had shown me some interesting tooling in Clojure they were building based on using the edn format for creating “grammars” that would power dynamic text responses.

When I set up selfcare.tech, someone suggested I set up a bot to go along with it and the rest is history.

Stefan Did you make any bots for Twitter? How does the process compare to making bots on botsin.space?

codl I’ve made maybe a dozen Twitter bots, all of which are defunct today. Most were the kind that pick a phrase or image from a pool, nothing too creative or exciting I’m afraid. I think my favourite is @ffz_png, a bot that would post a random custom emote from Twitch.tv extension FrankerFaceZ.

In theory the process of making a bot for Twitter or for Mastodon is, functionally, the same. The APIs are very similar.

In practice I’ve had a lot more trouble *maintaining* bots on Twitter than on Mastodon, with Twitter suspending my accounts or my API keys at the drop of a hat, I assume because a moderation machine thought something looked fishy, leaving me to go through a lengthy appeals process with no idea of what my bots were being accused of. I am currently banned from creating any new Twitter API keys, have been for four or five years now, with no ability to appeal, and I have not been able to find out why.

I have had no such trouble on botsin.space or on fedi in general, though I know some instances forbid bots entirely, that’s something I look out for. I think botiquette is a bigger deal on fedi than it is on Twitter, not only towards users but also towards the instance that hosts your bot. Federation traffic isn’t free! Someone’s paying for all those images! If I had known back then the kind of traffic that my bot would eventually generate, I would have asked Colin Mitchell ahead of time if it was OK for me to host it on botsin.space.

JP I had looked into building a bot from scratch myself using Kate Compton’s Tracery, since it’s in JavaScript, my preferred language. However, this was supposed to be a fun project and the challenges that came along with getting that running on my own were significant (years later, I’m still confused about how to set up CRON jobs properly).

I ended up using the excellent and easy cheapbotsdonequick.com to get the job done using grammars I had already prepared. For botsin.space, I’m grateful that @boodoo@mastodon.social set up cheapbotstootsweet.com which does the exact same thing for the fediverse.

So, I took the easy but, most importantly, sustainable route and I’m happy with the results.

Stefan What do you think makes your bot so popular on Mastodon? Did you do anything special to promote it? Does your bot have a Twitter version? If so, is there a difference in their popularity?

codl I haven’t done any real promotion. I posted about it on my personal account when I first put it up in 2018, and followers have been trickling in ever since. I think people just really enjoy pretty pictures of space 😀. I regularly see folks recommend the bot in “follow friday” or “new here? follow these accounts for a starter pack” type posts.

Also, APOD is well known in nerd circles, and mirrors are all over the place. I wouldn’t be surprised if some folks seeked out an APOD mirror after joining the fediverse.

I believe there is a wealth of APOD-mirroring bots on Twitter, none are run by me. It looks like @apod on Twitter has 1.6 million followers, two orders of magnitude more than APoD@botsin.space has got. I’m not surprised, I imagine APOD has the same wide appeal on either network, but Twitter is simply bigger.

JP There is indeed a Twitter version, and holy wow it is nowhere near as popular as the Mastodon version. I do absolutely nothing to promote either of them other than having the main site linked in my various bios and mentioning them if someone asks for self care resources.

I actually had to go look at the numbers for these bots because I honestly ignore follower counts. I never look at my own either so it’s always a surprise to see the size of the audience. I have to admit I was pretty stunned to see how many folks are following this little bot. I had no idea. Go, little bot, go!

Stefan What’s your take on what’s been going on with Twitter since Elon Musk’s takeover?

codl I’m trying not to follow the story too closely, because it saddens me. I’m not attached to Twitter myself, but I hate to see it poisoned like this. I kinda wish Twitter had crashed and shut down very quickly after the takeover. At least we’d be done with it.

JP I’ve not been following this closely, but my take is that Twitter was once cool. It hasn’t been cool in ages. Its slow decline has been accelerated by Musk’s takeover, but so many people have so much time/energy/careers invested in the platform that it will take a long time for it to entirely lose influence.
It’s probably a good thing in the end that Twitter loses clout or even closes, but there’s a lot of people that are going to get hurt along the way in loss of income and connection to others, to say the least.

Stefan Where do you see the fediverse in 5-10 years from now?

codl I’m hoping to see more fedi server software that doesn’t look and function like Twitter. There is lots of room for experimentation with ActivityPub, but I worry sometimes that Mastodon being the top fediverse software leads to people viewing all fedi software (or ideas for such) through the lens of “Does this fit on my Mastodon timeline?” Often the answer is no. I hope we can move past that, and make fedi software that may not play too well with Mastodon’s semantics but allows new, weird interactions to take place.

JP I can’t predict how my own life will be in 5-10 years, so predicting the fediverse is quite a challenge!

I would like to see it continue to flourish without losing the “hometown” vibe that I’ve come to appreciate. I think the days of the siloed social platform are far from over and the fediverse is an excellent alternative to that structure. I seriously doubt it will ever be the dominant platform, but I think that’s a good thing.