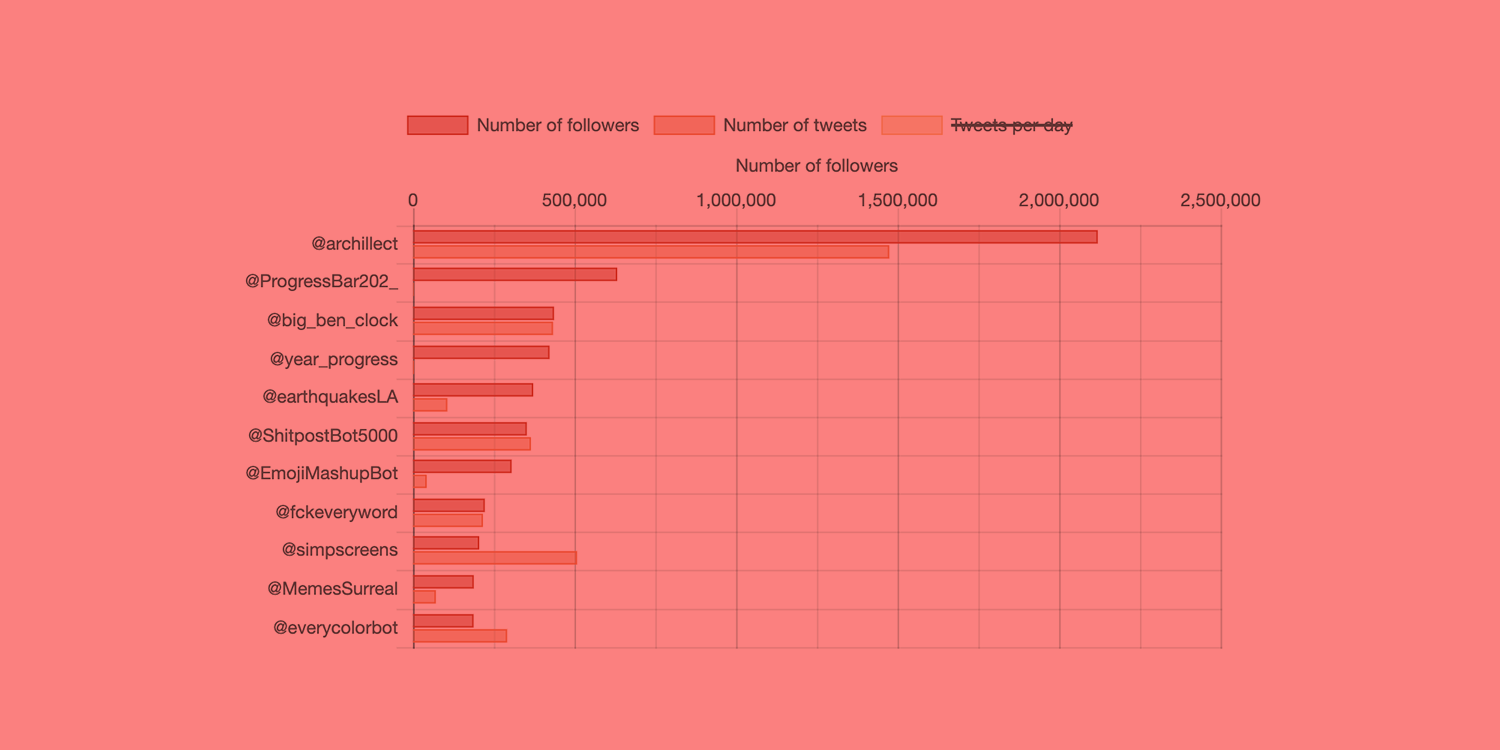 Posted 3 years ago in Article

If you ever wondered, for some reason, what the most followed bots on Twitter are, this blog post should give you a pretty good idea.

First, let me share how I came up with the numbers. Also, I would like to point out, if you’re not a regular reader of Botwiki, the site is only concerned with creative online bots, none of that election-interfering nonsense.

I used Tully Hansen’s Omnibots Twitter list as my starting point. It’s not very clear whether this list is updated automatically, and I did notice a few accounts that were either fully, or into a large degree maintained by real human beings, so I had to do a bit of a cleanup. (See the Omissions section for more details on that.)

With this data I created a chart with the Chart.js library that shows 30 Twitter bots with the most followers. You can also compare how many times each bot tweeted and at what rate, but keep in mind that some bots interact via DMs.

Some of the names will be familiar to regular readers of Botwiki. Old-school bots like @big_ben_clock, @infinite_scream, or @everyword are all here, together with one or two anime bots.

It’s worth noting the biggest rising star on this list, @EmojiMashupBot. The bot’s creator, Louan, was quite surprised by the bot’s huge success.

The bot got more than 100,000 followers in a week. I NEVER thought it would get this popular, this quickly.

I think that in a first place it got popular because it’s a fun, interesting idea. It’s easy to understand, everyone knows emojis nowaday and it’s easily sharable since a lot of people make funny captions of the emojis everyday.

Then, I got a bit lucky. I published the bot the 16th of July and it turned out that the 17th of July was “The World Emoji Day”. I temporarly added #WorldEmojiDay to my tweets and I think it got me some audience. Especialy a day after the launch.

Finally, it got retweeted and captioned by a lot of influential people on Twitter or by brands. A few days after the launch it became a real trend and a concept, and that is why it got so popular.

But really, I’m responsible for almost nothing besides having a great idea.

It is interesting to contrast this bot’s popularity with @emojibot, a Mastodon bot created a year and half before @EmojiMashupBot which now has a little under 500 followers. The choice to put this bot on an alternative social media network which can hardly compete with large, profit-oriented companies was clearly intentional and raises a good question for the creative botmaking community.

Rob Manuel, the creator of such classics as @swearclock and @clickbaitrobot, or one of his newer bots, @smashhitsbot, spoke frankly on this topic.

But for me making stuff that people respond to and like is half the point. I want to make popular stuff that intersects with my interests. I fail daily.

The intersection is important. Not do anything and chase numbers. But do stuff I think is good and then push it uphill to try and make people notice it.

Bill Snitzer, who created several Twitter bots that tweet about earthquakes as they happen, including SF QuakeBot, had this to say on creating bots that become popular:

I like that [bots] are able to disseminate accurate information in this social media world normally full of half truths and misleading propaganda.  They help people live in a rational and observable world, plus may spark interest in earth science and or computer science.

While it’s definitely interesting to see this chart that I made, the bigger point I would like to make with this article is that it’s both okay to want your work to be appreciated, but you also need to be prepared for it be ignored, or see someone else get more attention for the same or similar idea. (Did you know, for example, that Tumblr was inspired by two other sites that came before it?)

I’d say that bots can be personal, or a love letter to a single person.

As a botmaker, I just had a week-long sulk because my new bot (@art_omens) that I’d been fantasizing about for a long time, didn’t get any traction.

So take it easy, and try not to burn out. And hey, give some of these nice little bots a follow, would you?

A few Twitter accounts didn’t make the cut, so let me explain why that is.

First, there are accounts that do have some automated functionality, like the official @urbandictionary account, which responds to @ mentions with definitions from the site.

Then there is @RikerGoogling, which, according to its author, is now mostly automated, but has been run manually for years, during which it gained popularity.

But for my chart I only wanted to use accounts that are pretty much fully automated, and the following Twitter accounts don’t meet that requirement:

Are there any bots that I missed? Do you disagree with any of the omissions? Feel free to reach out via email or on Twitter.

Also, be sure to check out Justin and Allison discuss this article on their Robots on Typewriters podcast.