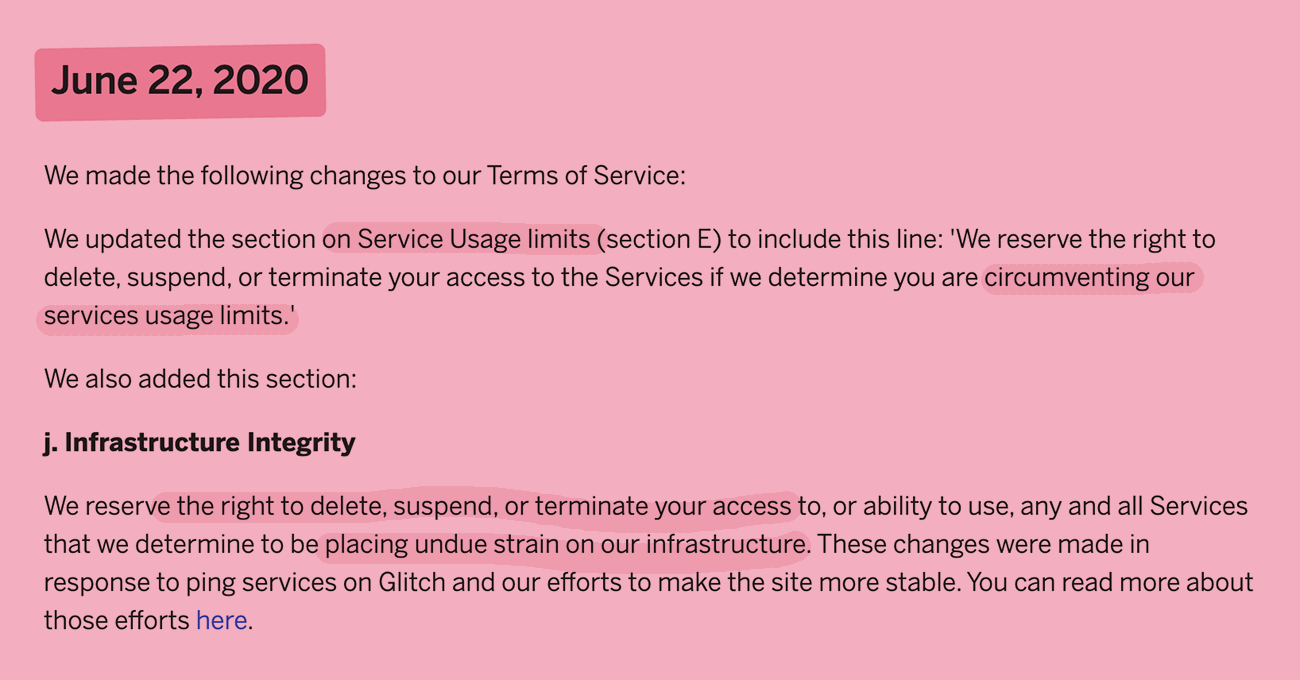 Posted 2 years ago in News

It’s an end of another era for makers of creative online bots as Glitch, a popular free service that combines the power of a hosted node.js development environment and cutesy retro design, just updated their terms of service and banned the use of pinging services.

For some context, one of the biggest limitations of Glitch has been that your apps become inactive if they don’t receive any traffic for more than five minutes. This is not an issue for smaller websites that don’t get a lot of traffic, or even bots that use webhooks.

The problem comes when you want to use Glitch to host a bot that posts on a schedule.

It’s been a common and accepted practice to use external service to “visit” your app and prevent it from being shut down and your bot to continue posting. (I’ve never been a fan of this solution; when writing tutorials for Botwiki I’ve always aimed for a less technical audience, and really didn’t like having to ask folks to set up an extra account just to schedule their bots.)

Glitch’s rise to popularity during the ongoing COVID-19 pandemic, which at least in part contributed to the company having to lay off a third of their employees, has been taking a toll on the service they provide with frequent downtimes. To address this, Glitch is officially banning the use of “pinging services (third-party or built on Glitch) to keep apps on Glitch awake, as part of our efforts to stabilize and support the platform”.

I asked the Glitch team if they have any plans to add a scheduling service, similar to Heroku’s Scheduler, but without this in place, your only option at this time is to upgrade to a paid account.

I’m also reaching out to the wider community to see what the reactions to this news are.

Many of the Botwiki starter projects on Glitch rely on pinging services and will be discontinued over time and replaced with the new creative-bots project template that requires a paid subscription.