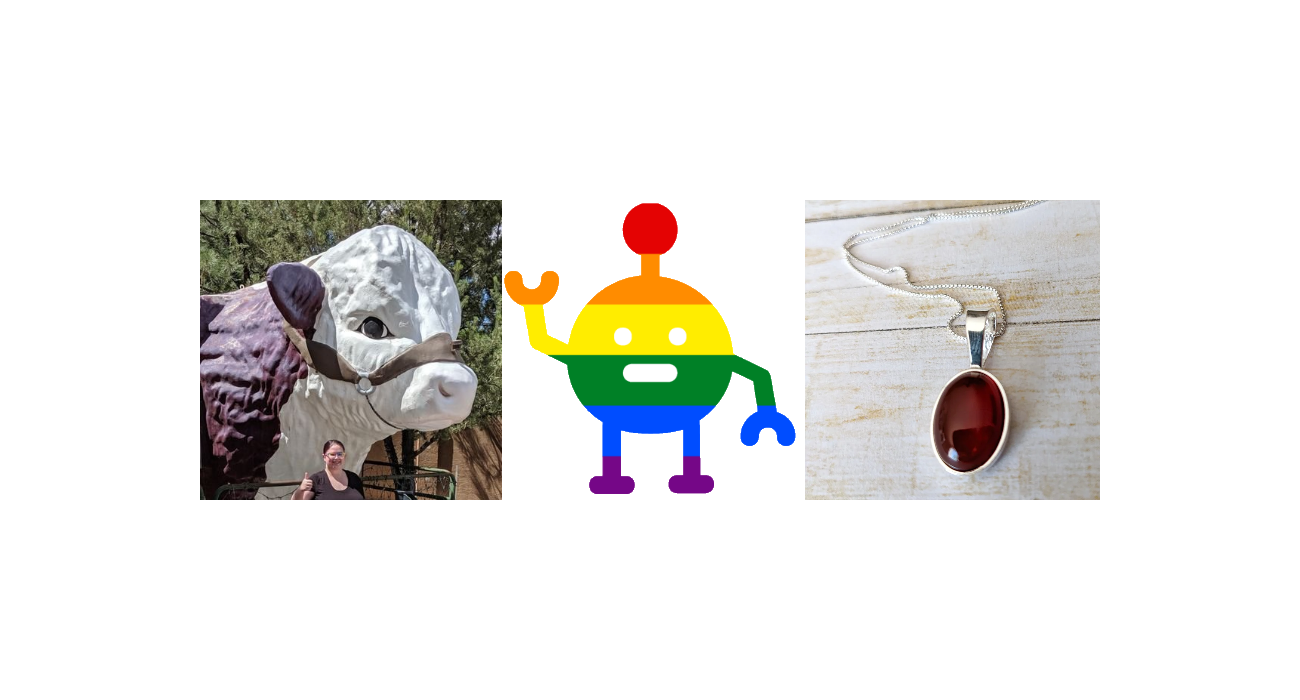 📅 a month ago in Botwiki Interviews | Updated 20 days ago

If you’ve spent any time on Twitter, you’ve surely seen @infinite_scream’s exasperated screams, as if commenting on current events, or perhaps just the weather, @thinkpiecebot’s think pieces, and @hydratebot‘s helpful reminders to stay hydrated throughout the day. And just maybe you’ve even seen people getting into a fight with some of Nora’s bots.

Nora’s latest bot, @AdventuringAds imagines classified ads that an adventurer living in the world of Dungeons & Dragons might post. And have you seen Nora’s jewelry store? Exquisite stuff! Nora also created a list of resources in response to the reversal of decades old protection of a right to abortion here in the United States , available at abortion.cafe.

Stefan Bohacek Nora, thank you so much for your time, it’s a genuine pleasure! Tell me, how have you been holding up during these so-called unprecedented times?

Nora Reed I think I’m holding up okay, considering. I’ve managed to not get covid yet, which feels like a big accomplishment.

Stefan Well that definitely is, I myself got it around Christmas. You’re not missing out! So tell me Nora, how did you first get into bots?

Nora I have been thinking about bots for a really long time, probably since I was a kid, because of the tables of items in Dungeons and Dragons sourcebooks, which are kind of proto-bots. But I never learned to code very well, so it took me until 2015 to actually start making them. I started using Google Doc spreadsheets that plugged into the Twitter API, which I am fairly sure you can’t do anymore, but as soon as I found out about Tracery and Cheap Bots Done Quick I was off to the races. I was a fountain of ideas, most of them not very good, but I had a great time with them, and pretty much everything I made, even the stuff I cringe a little at now, was someone’s favorite bot.

Nora Pretty much all my most successful bots (with exceptions for infinite_scream and infinite_bees) are just me taking a recognizable format, like the headline format for thinkpiecebot or the classified ad format for adventuring_ads, and adding stuff to it until it’s funny. A lot of my bots come from a place of irritation with marketing, like AutomataWinery and 420BeepBoop, which are both basically proof of concepts that a robot can come up with plausible descriptions of wine or of strains of cannabis, respectively.

Pretty much all my bots are made so that I can laugh at my own jokes. They have varying levels of success, but I generating ways to laugh at your own jokes is my #1 favorite way to use bots.

Stefan You seem to have a strong preference for Twitter with your bots. Have you tried making bots for other networks, like Tumblr, or Mastodon?

Nora Infinite Scream has a mastodon version and I have a bunch of my generators living on my own website, nora.zone, now. A lot of my bots used to be mirrored on Tumblr, but they killed IFTTT support, so they don’t work anymore. I’m currently trying to figure out how to embed my bots as generators in cohost posts, which I’m pretty excited about, but I haven’t quite figured it out yet.

Stefan The years between 2015 and 2018 were arguably the golden era of Twitter bots. What was this time like for you?

When Twitter bots submitted to Botwiki were created. Full article.

Nora As far as I remember, I was having a good time, making a ton of stuff, having a lot of it really explode. People used to seek out bots to follow in a way they don’t these days. I think I kind of burnt out toward the end; it took me a while to get back to wanting to make bots regularly again. Honestly, though, my memory from then is really warped just because of the trauma of witnessing such a sharp rise in American fascism, so it’s hard to remember what was happening in bots; everything else looms so large.

Stefan I absolutely agree. For me, especially the last two years are a blur. I haven’t really done much around Botwiki, other than occasionally adding a new bot here and there. I do think a site like this should exist, and it’s also good to have something positive to focus on.

I’m seeing a bit more interest in creative bots nowadays. Twitter engineers and developer advocates have been putting Twitter bots more in the spotlight. “Making a bot” is now an option when applying for a developer account, they’re featured as examples in their developer documentation, they’re writing tutorials, and some creative botmakers have joined their Twitter Developer Insider program, myself included.

Are you aware of any of these efforts, and what do you make of them?

Nora I’m glad they’re expanding their support for bots, but at this point, I’ve had more bots get suspended than I currently have active. I’m locked out of almost all of my bot accounts because I can’t give them phone numbers. I’ve just been really burned on the idea that they’re going to help people who are making art bots or other kinds of non-spam bots. I’m starting to mirror my bots on my own website, even though they lose a lot not being in the context of a timeline, because it’s just too scary having all of my work in the hands of a multibillion dollar corporation that does not care whether I live or die.

Stefan I definitely agree with you on not wanting your work to be locked into a specific platform. This was on my mind about two years ago when I made my Creative Bots project, which is a starter template for making all kinds of creative online bots. The project is platform-agnostic and currently supports Twitter, Mastodon, and Tumblr.

I really like your nora.zone site, this is giving in an idea to expand on my project and show the bots’ output on the site as well.

Many of us Twitter users, and some of the staff as well, anxiously await the impact of Elon Musk’s takeover of the social media site. He wants to crack down on bots, threatened to fire 75% of the company staff, and wants to bring back his buddy Donald Trump.

How do you think this all will play out? Do you have any plans to change your and your bots’ activity on Twitter?

Nora I have no idea what will happen. I’m honestly still a bit in denial about it. But I’m not sure if I’m going to keep making Twitter bots. It feels bad to be making money for a fascist just so I have a place to platform my art. I’m kind of wondering if I’ll get banned as soon as Musk takes over. He already has me blocked because I told him that if Iain Banks was alive he’d hate Musk’s guts, and I wouldn’t put it past him to ban his entire blocklist out of spite.

Stefan I hear you, I do wonder what he’d say about a site like Botwiki. I honestly wouldn’t be too surprised if he had my account booted after seeing the descriptions of some of the bots inspired by him.

But either way, I’d hate to end our chat on a negative note. What are some of the things, not necessarily related to bots, that give you hope these days?

Nora I think as far as politics are concerned, I see a lot of hope in local mutual aid groups. Picklebloc on Twitter does good work here in town, and there’s a bunch of other groups working side by side with them. I think abortion funds have really stepped up to the needs of the moment and I’m very impressed by them.

As far as online is concerned (not to say that politics and the web aren’t deeply intertwined), I think cohost is a really promising project. If cohost doesn’t work, I’m betting something like it– something built to deliberately not introduce terrible topics of discourse and to not have analytics that drive people to bad choices– will manage to really make at least a smaller nice community. I’m glad we have people working on those sorts of projects.

And for other stuff that gives me hope personally, I’ve been reading a lot of really good science fiction lately. I’m kind of obsessed with Ada Palmer’s Terra Ignota series, and a particular group in it, the Utopians. They have a philosophy that prioritizes work but never to the point of burnout, because they need everyone in the work of changing the world for the long haul, over generations. It’s something I’ve been holding close to my heart lately.

Stefan Those are all great answers, and I will be looking into the projects and resources you mentioned. Thank you for sharing this.

I really enjoyed speaking with you Nora, and ending our conversation on such a hopeful note. Thank you so much for your time!

Nora You’re quite welcome! Thanks for all you do!

For folks who would like to support Nora’s work, I recommend checking out their jewelry store and their Patreon page.